A large blow molder was experiencing high scrap rates processing TiO2 filled HDPE on a standard chrome plated feed screw. They wanted to reduce carbonized material that resulted from sticking, charring and eventual release into the product. Screws are pulled every four months to be cleaned (sooner if necessary) and then reinstalled into whichever machine is next in rotation. Various screw designs are used depending on the polymer being processed. They have over 100 machines at this site and a total of eight manufacturing locations. 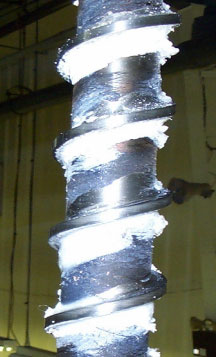 Extreme Coatings encapsulated a 2-1/2” screw with .005” ( 0,125 mm) of XC1000 in May of 2001. In February 2004 this original feed screw was returned for evaluation. There was slight build up on the trailing flight edge but the OD was still within original specification after 33 months in process. The screw was re-polished to a mirror finish and sent back to the customer.

To combat the fine particle abrasion from TiO2, subsequent screws have been encapsulated with our XC9000 Millennium carbide. A thickness of .005” (.125 mm) has provensufficient to ensure continued long life.

For this blow molder the results have shown that XC9000 is significantly better than chrome in reducing scrap from polymer build up on the screw surface. The screws are easier to clean than before with less build up in same time frame and the wear life is much higher. Since the first carbide coating proved successful, this company has coated over 35 screws with our Millennium carbide.

Click here to increase the life of your mud rotors

Click here to increase the life of your extrusion & feed screws