You are here: Home / Archives for Injection Molding

This customer makes valves for use with corrosive or harmful materials. These parts are large, thick-walled and made from C-PVC. Large parts necessitate a long cooling cycle which can lead to degradation of the resin waiting to be injected. C-PVC is very shear sensitive and tends to degrade easily if over heated and then stick to the screw surface. Sticking material burns and when released into parts leads to porosity and defects.

About 5,000 to 6,000 parts are made in a typical production run which then receive a post-mold machining step to complete fabrication. It not until this final step that porosity and defects are found. This customer estimates the scrap cost from degradation at $60,000 to $70,000 per year.

Their standard screw is hard faced with double and triple chrome to combat corrosive hydrochloric (HCL) acid that results from degraded PVC. Chrome is porous and HCL can penetrate to the screw surface and weaken the chrome bond. An aggressive cleaning procedure also roughens the screw surface and further loosens poorly bonded chrome. A rough screw surface leads to material build up resulting in to polymer degradation and finally increased scrap.

Scrap rates for this process vary between 15% and 30% depending on part size and the quantity of parts produced. Their standard procedure is to remove and clean the screw before beginning this process and then to purge regularly during production to reduce build up on the screw.

A large blow molder was experiencing high scrap rates processing TiO2 filled HDPE on a standard chrome plated feed screw. They wanted to reduce carbonized material that resulted from sticking, charring and eventual release into the product. Screws are pulled every four months to be cleaned (sooner if necessary) and then reinstalled into whichever machine is next in rotation. Various screw designs are used depending on the polymer being processed. They have over 100 machines at this site and a total of eight manufacturing locations.

Severe corrosion from a Halogen-free flame retardant additive completely consumes powder metallurgy feedscrews in as little as three months. This aggressive material has been introduced to meet new RoHS (Restriction of Hazardous Substances) standards established by the European Union. Extreme Coatings protective carbide encapsulation completely isolates a feedscrew from the process environment which eliminates corrosion in these applications. Feedscrews that before were quickly worn can now process for 18 to 24 months in this aggressive environment. This is a reprint of an original article that appeared on 5 June 2008 in K-Zeitung and in issue no. 6/2008 of Kunststoff-Berater

May 2008, Wiehl, Germany: Thanks to innovative feedscrew technology involving tungstencarbide (TC) coating, Rudolf Donner e.K., headquartered at Wiehl-Angfurten in Germany, is extremely well prepared for the processing of polyamides (PA) with high proportions of fiberglass. The company, having been active in the injection molding sector since 1972, predicts a growing market in this field. Specialized screws from Groche Technik, in Kalletal (Germany) (and tungsten carbide coating by Extreme Coatings St. Petersburg Florida USA) guarantee optimum plasticizing of these highly abrasive polymer blends, at the same time giving noticeably higher life times when compared with conventional screws.

Mike Donner, CEO of Donner Spritzgussfertigung e.K. sees his company as the ‘extended workbench for the automobile industry’. Working on a three shift, seven day a week basis, the company, founded some 36 years ago as a family business, processes technical polymers – mostly with high percentages of fiberglass – on 12 injection molding machines. Donner e.K. manufactures motor vehicle components as well as tracks or cable guiding crawlers, for instance for robots. According to Mike Donner, processing polymers, primarily PAs containing proportions of fiberglass between 25 and 40 percent, the standard Groche Technik feedscrew of powder metallurgically hardened steel and a bi-metallic cylinder, has proved itself optimally.

This process suffers an extreme wear rate. Fifty mm, CPM-9V screws last three to five months running a polyamide based material with up to 60% glass fiber fill. This is a metal replacement material used to make structural automotive Class A parts.

A combination of high glass fiber filler and large shot utilization shorten screw and barrel life. The facility has more than 50 machines operating around the clock and process conditions are monitored closely to determine when a wear condition exists. Loss of cushion leads to a tip assembly replacement. Increased recovery time means a worn screw and barrel and typical preventive maintenance consists of removing the old barrel and screw as one piece and depositing them whole in the dumpster. New screw, barrel and tip are then installed to reduce down time and keep producing.

Their 300 ton Van Dorn machines were using 90% of the available shot size which reduced polymer residence time and greatly accelerated system wear. The customer increased screws and barrels from 50 to 57 mm to increase shot size and improve residence time. They also decided to evaluate carbide encapsulation as the price of CPM-9V tool steel was high and larger screws required 30% more material to manufacture. 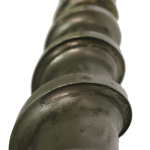 A major feed screw manufacturer asked Extreme Coatings to help solve a severe abrasion issue with a large injection molding customer. This is dedicated equipment processing an engineered nylon with 15% glass fiber and 20% glass bead filler. Previous CPM-9V screws experienced as much as .035” (0,87 mm) wear in two months or less. They process with a reverse temperature profile and recommended polymer residence times. The customer wanted to maintain screw design across all equipment so a specific screw design change was not contemplated for this process.

This customer approached us at a trade show looking for help to solve a severe abrasion problem coupled with product contamination. The process is proprietary and details are confidential.

This is a Powder Injection Molding process and, as is common to this process, parts are sintered after molding to achieve final size and part density. Clarity of the finished part was extremely important and any contaminants in the process usually showed up as a darkening of the sintered part.

These are small parts being processed on small 30 ton machines. Past wear protection consisted of a surface hardening treatment to infuse an elemental material into the screw surface resulting in a hard layer. High temperatures were required to achieve this layer and post heat treat straightening was difficult. The result was a screw and barrel with a large initial clearance of about .009”, which accelerated wear and shortened component life. Hard surfaced screws lasted about 3 months and 300,000 shots until product contamination lead to too much scrap and the screw was replaced.

As this hard layer wears, the softer substrate is exposed, which accelerates wear. More importantly, wear increases the amount of contaminants in the finished product causing a loss of clarity. Scrap goes up.

This small custom molder supplies injection molded parts to a Tier 1 automotive supplier. The parts are part of seat assemblies that are then delivered to the auto assembly line as Just-in-Time inventory.

These parts are right and left seat-back adjustment handles. They are made from flexible PVC with talc filler. In the spring of 2005 parts were shipped from the supplier in Michigan to the customer in Georgia for final assembly. The change in humidity caused a rust colored “blush” to form on these parts and they were immediately rejected by the customer. No similarly defective parts could be found at the supplier’s site.

Investigation into the source of contamination quickly ruled out raw materials and the focus was shifted to molding equipment. Standard procedure was to remove and clean a feed screw when operators noticed char particles in finished parts. Screws are cleaned with an aggressive steel wire wheel and scraping of the screw surface.

This 50 mm feed screw, unique to the machine manufacturer, is a 2-stage design not well suited to PVC processing. An aggressive molding process input too much shear energy to the material which resulted in HCL formation. Acid attack, the talc filler, and an aggressive cleaning procedure caused a breakdown of the chrome plating and allowed iron contamination to leach into finished products. This contaminant in the presence of moisture developed the discoloration that caused parts to be rejected.

A large custom compounder makes a thermally conductive material designed to dissipate heat quickly and effectively. This product is highly filled with a proprietary material that causes their customers severe abrasive wear. This has actually limited the product’s acceptance even though the resin is less expensive than other materials and very effective.

This compounder was approached by their customer asking for a solution to rapid wear. They in turn asked Extreme Coatings to contact this processor to offer help.

This customer makes parts for the home appliance market, in this case, washing machines. This thermally conductive material was specified by the manufacturer for an inlet flume that incorporated temperature sensors to control and mix incoming hot and cold water.

Standard molding equipment was used to process the first batch of parts. The Maintenance Manager commented that “the feed screw looked like a broom stick in one week running that stuff!” CPM-9V feed screws lasted 20,000 shots with .030” total OD wear in 1-1/2 months. These parts are batch produced in a campaign every four months throughout the year. 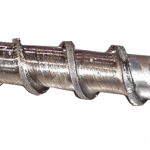 This customer makes consumer products for the Lawn and Garden industry. Economics of operation has lead to much of their production activity being moved to lower cost countries. This plant countered the trend by making better quality finished products (longer life) at a lower cost than the offshore site.

They process a 33% glass filled nylon material making structural engine housings. These parts require strength and heat resistance. This is a large part approximately 2-1/2 to 3 lbs shot size on an 80 mm 18:1 feed screw. Cycle times are about 1 minute which means polymer residence time is very short and with a nylon material this can contribute to more rapid wear.

Past 80 mm GP screws were hard faced with Colmonoy 56 and hard chrome plating. At six months of 24/7 operation these screws had as much as .030” of OD wear. Root wear and flight side erosion were also evident which made screw rebuilds uneconomical.

Click here to increase the life of your mud rotors

Click here to increase the life of your extrusion & feed screws